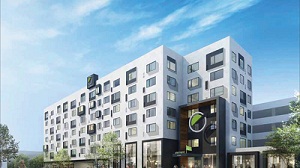 Set to Double Portfolio in the Next Two Years, Element to Expand Outside of North America for First Time Ever with Openings in Frankfurt, London, and Suzhou, China

– Starwood Hotels & Resorts Worldwide, Inc. (NYSE: HOT) today announced unprecedented growth momentum for Element Hotels, fueled by strong demand for the stylish, eco-wise brand, with its portfolio set to double in the next two years. On track to open its 15th hotellater this year, Element hasanother 15hotels slated to open by the end of 2017. With four new hotels opening in 2014, Element will expand outside of North America for the first time ever with the opening of Element Frankfurt Airport in September.In 2015, the launch of Element Suzhou Science and Technology Town will mark another milestone for Starwood, making China the only market outside of North America where Starwood will operate all nine of its lifestyle brands.

Additionally, rising demand for Element has led to an increase in dual-branded hotel developments featuring Starwood’s Aloft and Element brands in major metropolitan markets. Starwood recently signed deals to open Aloft and Element Boston Waterfront in 2016, directly across the street from the Boston Convention and Exhibition Center in the South Boston Waterfront District.  In 2017, Starwood willopen an Aloft and Element dual-hotel development in the historic Tobacco Dock section of East London, marking the Element brand’s debut in the United Kingdom.

“We’re seeing tremendous growth momentum for our trailblazing Element brandand for the first time ever, we’re expanding outside of North America, bringing whole,sustainable living to the European and Chinese markets,” said Brian McGuinness, Senior Vice President of Specialty Select Brands for Starwood.  “Recognized as an industry leader in the eco-space, Element consistently outperforms its competitive set and has won over the hearts and minds of travelers with itsemphasis on wellness and sustainability, as reflected by the brand’s outstanding guest experience scores.”

“Element is rapidly gaining momentum as financing returns to the market and conditions for new hotel development continue to improve,” said Allison Reid, Senior Vice President of North America Development, Starwood Hotels & Resorts Worldwide, Inc. “There is really nothing in the market like Element, and travelers have embraced the brand’s fresh perspective on extended stay.  We anticipate the recent deal signings in London and Boston will continue to fuel growth for the brand in both urban and suburban markets around the world.”

New Element hotels slated to open in the next two years include:

Element is the first major hotel brand to mandate that all properties pursue the U.S. Green Building Council’s Leadership in Energy and Environmental Design (LEED) certification for high-performance buildings.  Consisting entirely of new-build hotels, Element offers travelers a reimagined interpretation of the extended stay hotel experience that promotes life in balance and on the move.

Element Hotels offer light-filled studios as well as one bedroom suites with a fluid design of modular furniture, swiveling flat-screen televisions, large desks with open shelving and custom-designed closets. Element guest rooms also feature fully equipped kitchens and the signature Heavenly® Bed. Spa-inspired bathrooms are equipped with an invigorating rain shower and dual-flush toilet. Other brand signatures include fast and free Wi-Fi throughout the hotel, a meeting room with modular furnishings, a flexible guest room layout and state-of-the-art technology that can be customized to meet any business or social needs.  Guests can stay on the move with Element’s state-of-the-art, 24-hour fitness center, outdoor pool, and complimentary bikes-to-borrow and stay healthy and maintain balance with the signature RISE breakfast, RELAX evening reception, both complimentary, and salon bar carts stocked with premium wines and beers, soft drinks and snacks, available after hours.

For more information, visit www.ElementHotels.com or connect on Facebook.