A weak lira cut net profit at Turkish Airlines by almost a third in the second quarter despite a sharp rise in sales.

The flag carrier, one of the world’s fastest growing airlines, said on Tuesday net profit fell 29 percent to 143.5 million lira ($72 million) in the three months to the end of June, compared with a forecast of 304.6 million in a Reuters poll. 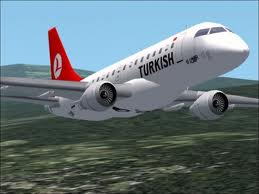 “The operational performance was in line with market expectations but a reduction in the non-operational revenues and foreign exchange costs meant the net profit forecast was missed,” Ekspres Invest analysts said in a research note.

Turkish Airlines shares slid 4.3 percent on the news but later pared losses to trade at 7.34 lira by 0717 GMT, down around 1.3 percent from Monday’s close.

Sales in the quarter jumped 20 percent to 4.6 billion lira.

The lira has hit a series of record lows in recent months, with growing expectations that the U.S. Federal Reserve may soon start tapering its stimulus programme, hitting investor appetite for emerging markets.

It weakened beyond 2 to the dollar for the first time ever on Tuesday.

The state-run airline carried 22.4 million passengers in the first six months of the year, up 26 percent year-on-year. It says it aims to increase passenger numbers to 46 million this year from 39 million last.