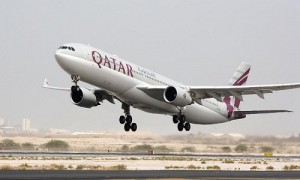 Qatar Airways has inaugurated its seventh gateway into the Kingdom of Saudi Arabia by adding the city of Al Ahsa to its ever-growing network.
The new route to Al-Ahsa International Airport will comprise four weekly non-stop flights from the airline’s hub in Doha, and will increase the number of Qatar Airways’ weekly flights to Saudi Arabia from 75 to 79.
The inaugural flight, which carried Qatar Airways dignitaries, was greeted with a traditional water cannon salute, and Naif Al-Ghamidi, Al-Ahsa Airport Director, led the welcoming committee.
The launch is part of the continued expansion of Qatar Airways’ services to Saudi Arabia which began in 1997 with non-stop flights to Jeddah. Since then, the airline has added Riyadh, Dammam, Madinah, Gassim and Tai’f to its portfolio of destinations within the Kingdom.
“We have offered our excellent global connectivity to customers from Saudi Arabia for more than 15 years, and with the introduction of this new route, we look forward to offering our five-star services and global connectivity to even more customers to and from Al Ahsa,” said Qatar Airways Chief Executive Officer Akbar Al Baker.
“As we continue to expand our network and receive more aircraft, we will keep looking at opportunities to add capacity to our existing network and further strengthen our links within the Gulf.” The new Al-Ahsa route will be served by an Airbus A320 aircraft in a two-class configuration, with 12 seats in Business Class and 132 seats in Economy.
In addition to this new route, Qatar Airways has also recently announced plans to double its weekly frequency to Gassim, and increase the number of flights to Madinah from weekly flights to daily operation.
Qatar Airways has seen rapid growth in just 17 years of operation, to the point where today it operates a modern fleet of 134 aircraft to 138 key business and leisure destinations across Europe, the Middle East, Africa, Asia Pacific, North America and South America.
Over the next few months, the network will grow further with new routes to Istanbul Sabiha Gokcen Airport, Turkey (May 22, 2014), Edinburgh, Scotland (May 28, 2014), Miami, USA (June 10, 2014), Haneda, Japan (June 18, 2014), Dallas/Fort Worth, USA (July 1, 2014) and Djibouti (July 27, 2014).