Qatar Airways to Debut A380 Aircraft to Paris in July 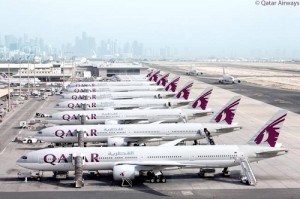 Qatar Airways has announced that its second A380 aircraft will commence operations this summer to Paris Charles De Gaulle from its Doha new hub, Hamad International Airport.
With a customized interior to meet the carrier’s five-star standard, the new A380s will be “the talk of travelers” at Hamad International Airport when services commence, Qatar Airways said in a press release issued Monday.
The Qatari airline recently revealed that the first of its 13 A380 aircraft on order will commence operations on the QR003 and QR004 London-Heathrow route from June 17. Following this, the airline has now confirmed that its second A380 will be used to fly to Paris Charles De Gaulle airport from Doha from the July 3, on QR39 and return on QR40.
“It is yet another significant moment for our airline as we welcome these new aircraft into our rapidly expanding fleet. Operating on the Doha to Paris Charles De Gaulle route, these aircraft, with their customized cabins and five-star specifications, will set a new level of comfort for our passengers, who will also benefit from the smooth and pleasant passenger experience at the world’s newest hub, Hamad International Airport – the soon to be home of Qatar Airways,” said Akbar Al Baker, Qatar Airways CEO.
Featuring a tri-class configuration of seating in first, business and economy classes, over two decks, the A380 is the largest passenger jet in the world and will provide a superior traveler experience to the Qatar Airways’ customers.