Etihad Airways continued to achieve record growth in the third quarter of 2013, with revenue from passenger services exceeding US$1 billion for the first time and passenger numbers passing 3 million.   Total revenue rose 11 per cent to US$1.4 billion, compared to US$1.3 billion in Q3 of 2012, while network-wide passenger load factors reached 81 per cent. 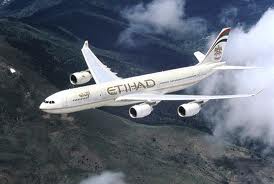 Revenue from codeshare and equity alliance airline partners was US$247 million in Q3 2013, 36 per cent higher than the US$181 million delivered in Q3 2012. Partnership contributions accounted for 23 per cent of total Q3 passenger revenue, while passenger numbers rose by 11 per cent to 3.06 million (2012: 2.75 million).

The President and Chief Executive Officer of Etihad Airways, James Hogan, said the Q3 growth occurred in a climate of increasing capacity and ongoing price competition. It also compensated for reduced travel during the Holy Month of Ramadan, which fell across the traditional peak travel months of July and August.

“In addition to our own growth in Q3, we continued to develop our partnership strategy”, Mr Hogan said.

“Headlining our partnership activities, we continued to work closely with regulatory authorities in India as we progressed our plans to acquire 24 per cent of Jet Airways – the first offshore investment in an Indian airline under the country’s Foreign Direct Investment legislation.

”We signed an agreement with the Government of Serbia to enter into a five-year contract to manage Serbia’s national airline, Air Serbia, currently trading as Jat Airways, and integrated its frequent flyer program with our own Etihad Guest. We also increased our stake in Virgin Australia from 10.5 to 17.4 per cent, and launched partnerships with South African Airways, Air Canada, Belavia and Korean Air, taking to 46 our number of codeshare agreements and expanding our virtual network to 375 destinations.”

Etihad Airways introduced one new route in Q3, between Abu Dhabi and Sana’a, Yemen, and increased capacity on other routes through extra flights or the use of larger aircraft. Three aircraft joined the fleet – one new narrow-body Airbus A320, one new wide-body Boeing 777-300ER and a leased Airbus A330. Etihad Cargo also delivered a 41 per cent increase in volumes during Q3 to 132,448 tonnes (2012: 94,123). Etihad carries 90 per cent of all air cargo to and from its Abu Dhabi hub.