Etihad Airways’ First sponsorship in US gets off to fast start

Etihad Airways’ first major sports sponsorship in the United States will be up and running this weekend with the Nation’s Triathlon event taking place in West Potomac Park, Washington, D.C. on Sunday, September 8th, 2013. 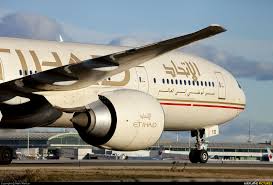 Etihad Airways launched its daily service between Abu Dhabi and Washington, D.C in March this year, and is sponsoring the Nation’s Triathlon to promote the sporting links between these two capital cities, further strengthening the cultural and commercial ties between the UAE and USA.

Geert Boven, Etihad Airways’ Senior Vice President, Americas, said, “Sporting events are a great way of bringing people together. We also see this as an important first step to engage with the people in the local community.

The sponsorship of the Nation’s Triathlon ties in with the airline’s existing sponsorship of the Tri Yas event in Abu Dhabi, and encourages greater participation from triathletes wishing to take part in either race, with the development of tailored event packages that include shipment of bikes, special hotel rates and event entry fees.

Officially recognised by the governing body, USA Triathlon (USAT), the Nation’s Triathlon is an international distance event comprising a 1.5 kilometre swim in the Potomac River, 40k bike course through the streets of Washington and Maryland, finishing with a 10k run through Washington DC’s historical landmarks with a spectacular finish south of the FDR Memorial.

The weekend-long festivities start off with a two-day public Health ‘&’ Fitness Expo at the Washington Hilton Hotel on September 6th and 7th, and conclude with the Finish Line Festival, where presentations will be made to the winners of the various race categories, which includes the Etihad Airways Tri Club Challenge.

The male and female winners of the Etihad Airways Tri Club Challenge will each receive two round trip tickets on Etihad Airways and complimentary entry into the Tri Yas triathlon, including three night’s stay at a hotel in Abu Dhabi.

Tri Yas, one of the most prestigious triathlons in the Middle East, takes place on February 28th, 2014, at the Yas Marina Circuit – home of the Formula 1 Etihad Airways Abu Dhabi Grand Prix.