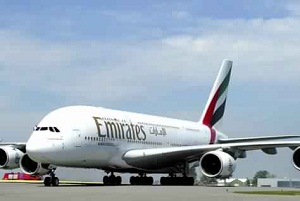 Emirates announced today the launch of A380 services to two European destinations: Dusseldorf and Madrid, becoming the first airline to operate a scheduled A380 service, offering an unmatched travel experience to business and leisure travellers alike.

The addition of Dusseldorf and Madrid to the list brings the total number of European gateways served by Emirates’ A380, the world’s largest passenger aircraft, to 13. Emirates currently has 57 A380s in its fleet, flying to 36 destinations globally and wowing customers everywhere it flies with its industry-leading onboard features.

“As the world’s largest operator of the A380, Emirates is proud to further expand the number of destinations served by this incredible aircraft. It offers passengers in all three classes a superior travel experience,” said Hubert Frach, Emirates’ Divisional Senior Vice President Commercial Operations – West. “By introducing new A380 services out of Dusseldorf and Madrid, our customers can enjoy seamless connectivity on the most talked about aircraft, to popular destinations in Asia, Africa, Indian Ocean, Australia and the Middle East, via our Dubai hub.” As of 1st July, EK055 will be operated by an A380, leaving Dubai at 0830hrs and landing in Dusseldorf at 1325hrs the same day, while EK056 will depart Dusseldorf at 1525hrs and arrive at Dubai International Airport at 2355hrs the same day.