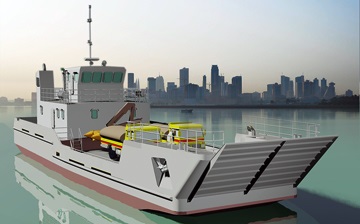 ASRY, the leading ship and rig repair yard in the Arabian Gulf, has signed an agreement with the Bahrain Coast Guard to design and construct a new Landing Craft for the transport of vehicles, potable water, and fuel. The craft, potentially the first of two, will be delivered in 2016.

The contract, worth approximately $2.8m, marks ASRY’s first newbuild contract since launching the New Construction & Engineering division, which is tasked with growing the new construction programme at the yard.

“This deal is significant for ASRY,” commented ASRY Chief Executive, Nils Kristian Berge, “as it marks the beginning of ASRY’s new move into the new construction market. Historically ASRY has always had the capabilities and resources to run a quality new construction programme, with several newbuilds completed over the years, but we now see a gap in the market of regional ship construction of small to medium sized vessels. Our New Construction & Engineering division now boasts some of the most experienced naval architects and engineers in the Arabian Gulf and combines them with ASRY’s years of know-how to make a first class newbuild team.”

Sauvir Sarkar, ASRY New Construction & Engineering Senior Manager, elaborated, “The newbuild market in the Arabian Gulf still has significant room for growth. With ASRY’s experience, we can build world-class vessels at prices competitive with international builders. We aim to put this region on the map in terms of vessel design and construction, especially small-to-medium sized vessels.”

During the Kick off meeting with Coastguard, Brigadier Ala Abdulla Seyadi, Commander Coastguard stated that, “ASRY’s experience is well-known, and their quality of work shows through their shiprepair operations. It’s a natural step for them to move to step up their newbuild work, and we’re very comfortable trusting them to grow our fleet at a reasonable price point. We hope to work with them with several other projects in the future.”
Lt Colonel Jahangir Sarwar, Chief Engineer, Bahrain Coast Guard confirmed that this would be another milestone for ASRY after successfully building the Check point Barges for BCG. “We have a good history with ASRY and expect it will continue with this and future projects, and are particularly interested in ASRY’s advanced capabilities such as 3D simulation tool to give greater feedback at engineering stage.”
The landing craft will be approximately 34.5m in overall length, with two 600 horsepower engines, having a top speed of 10 knots and cargo deck capacity of 40 tonnes. Delivery is expected in the first half of 2016.