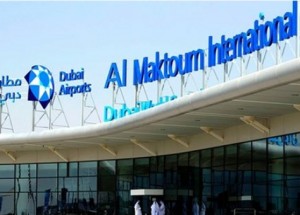 Since the opening of the new passenger terminal last October, passenger volumes at DWC have continued to gain momentum, with 102,137 passengers passing through the airport in the first three months of the year.

Last month, Qatar Airways joined Wizz Air, Al Jazeera Airways and Gulf Air, which already operate flights from Dubai’s second airport, offering twice daily flights to Doha from DWC The growth trend is expected to escalate in the second quarter of 2014 with more than 600 flights per week temporarily moving over from Dubai International – where both runways will be refurbished and upgraded between May 1 and July 20.

Among the airlines is flydubai, which will operate a select number of flights from DWC in addition to flights from Dubai International’s Terminal 2.

Freight volumes also rose, recording 76,816 tonnes in the first three months of the year, up 42.3 percent from the 53,974 tonnes achieved during the first quarter of 2013.

This growth trend is expected to be maintained, with Emirates SkyCargo joining the move to DWC in May when it moves all dedicated freighters to the airport.

As a result of the increased activity, aircraft movements climbed sharply in the first quarter of 2014 to 9,965 movements, up 142.8 percent from the 4,104 movements in the first three months of 2013 “It was a gratifying quarter of growth for DWC. Passengers appreciate the simplicity of using the new passenger terminal which allows them to quickly move from kerbside to the gate,” said Paul Griffiths, CEO of Dubai Airports.

“The airport will also play a vital role in the runway upgrades at Dubai International, with a number of passenger airlines relocating to DWC for the duration of the works.”