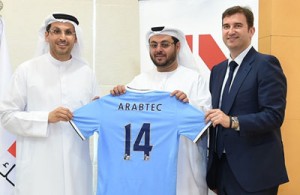 According to the deal, the Manchester City Club will receive the support of Arabtec, which specialises in the construction of major development projects in the region, while Arabtec will receive promotional benefits for its brand in the Middle East, North Africa, Russia, India and Serbia.

Arabtec will also receive certain rights to use the Manchester City logo, in addition to tickets and programmes for prominent figures to attend the club’s games. Arabtec’s logo will also be displayed at the Etihad Stadium during matches and events.

The deal was signed by Ferran Soriano, City’s Chief Executive Officer, and Hassan Ismaik, Managing Director and CEO of Arabtec.

He also added that the club’s achievements had led Arabtec to sign a regional sponsorship deal, adding that the deal will help achieve the interests of both parties. Ismaik pointed out that the deal is also in line with Arabtec’s expansion plans to become one of the world’s 10 largest companies by 2018.

For his part, Soriano affirmed the importance of sponsorship deals for the club’s progress. He said that Arabtec is a leading name in the region’s construction sector, and that both Manchester City and Arabtec aspire for global recognition.