Emaar Properties PJSC, the global developer of iconic projects, has joined forces with Lotus F1® Team as its ‘Official Partner.’ Emaar’s association with the world’s most widely followed motorsport, the Formula 1 Championship, is a strong demonstration of the company’s fast-expanding global brand imprint. 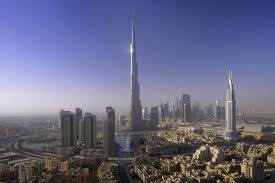 The partnership with Lotus F1® Team marks Emaar’s first high-profile endorsement of the motor racing sport, and follows the triumph of the Team at the Abu Dhabi Grand Prix last year under Finnish superstar Kimi Räikkönen, in addition to six podium finishes in the racing circuit.

Emaar is in good company with recent partnerships with brands such as Microsoft, Unilever [Clear and Rexona] and The Coca-Cola Company [burn].

Mohamed Alabbar, Chairman of Emaar Properties, said: “Formula 1 racing brings man, mind and machine in one exciting journey to perfection. The minute attention to details, the passion and commitment, and the determination of every participant to push the boundaries are values that have also set Emaar apart, as we challenged accepted norms to develop world-class projects such as Burj Khalifa and The Dubai Mall.

“Our partnership with Lotus F1®Team a remarkable team with impeccable credentials in the racing circuit, is therefore a perfect fit to our own values. As they race at the Formula 1 Championship circuits across the world, we are truly honoured to extend our support to the Lotus F1® Team, while also engaging with our international clientele and further defining the global identity of our brand.”

Eric Boullier, Team Principal, Lotus F1 Team: “We are delighted to begin this new relationship with Emaar Properties; particularly as the UAE has been a fruitful location for us on track with Kimi Räikkönen winning the 2012 Abu Dhabi Grand Prix. That victory truly confirmed that Lotus F1 Team as one of the foremost outfits in Formula 1 and we have continued our strong performances this season. With this new partnership with the developer of such iconic projects as Burj Khalifa and The Dubai Mall, we are looking forward to some home support as we race in the UAE once again this year. We are also very excited to see how this partnership will further enhance Lotus F1 Team’s brand value.”

The much-awaited Abu Dhabi Grand Prix in Yas Marina is from Nov. 1 to 3, starting with practice sessions by the team on the first day, a qualifying round on the second, and the exhilarating race on Nov. 3, at 5pm.