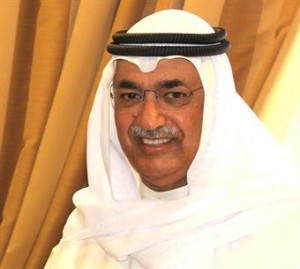 Deputy Prime Minister and Minister of Commerce and Industry Abdulmohsen Al-Madaj said Kuwait eyeing and is working for full economic integration among Gulf Cooperation Council (GCC) member states.
“Kuwait is working hard and persistently to boost trade relations among Gulf countries,” Al-Madaj said in his speech at the 19th joint meeting of General Secretariat, leaders of the Chambers of Commerce, Industry in the GCC member states, kicked off here Tuesday.
“Kuwait is fully aware of the pivotal role of trade exchange in enhancing GCC relations.” Al-Madaj said that the meeting will thoroughly discuss means to increase private sector’s contribution to the national economies as well as the executions of the development plans of member states.
“The meeting is a step forward toward facilitating trade exchange and creating a GCC common market,” the minister said.
The conferees will also review the economic resolutions taken by the GCC leaders during the latest summit, held in Kuwait last December, the role of private sector in national economies, obstacles hindering the creation of the GCC common market and full economic integrations.
He underlined that activating private sector is essential to achieving the previous goals.
For his part, President of the Federation of the GCC Chambers of Commerce and Industry Sheikh Khalifa bin Jassem Al Thani added that meeting will tackle the best means to achieve the highest level of integration and coordination among GCC governments and private sectors.
He argued that assigning the private sector to implement the development plans is important for reviving national economies.
Al Thani also lauded GCC General Secretariat’s role in unifying member states’ visions and coordinating and following up the implementation of these visions and the relevant resolutions.
Meanwhile, President of Kuwait’s Chamber of Commerce and Industry Ali Al-Ghanim pointed out that the GCC has made great stride in beefing up economic cooperation and integration.
He, however, noted that “There are still much to be done to materialize the goal of full integration among GCC economies.”