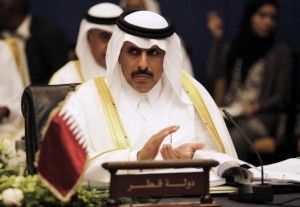 HE Governor of Qatar Central Bank (QCB) Sheikh Abdullah bin Saud Al Thani met this morning with Bank of Korea Governor Lee Ju-yeol in the headquarters of the Bank of Korea in the capital Seoul. The meeting was attended by HE Qatar’s Ambassador to the Republic of Korea Mohammed bin Abdulla Al-Duhaimi and a number of CEOs of some Qatari banks, the Regulatory Authority of Qatar Financial Centre (QFC) and Qatar Financial Markets Authority, in addition to a number of QCB senior officials. HE Sheikh Abdullah bin Saud Al Thani told Qatar News Agency (QNA) that during his meeting with the Bank of Korea Governor, they discussed the prospects of cooperation between QCB and its Korean counterpart and ways of enhancing them, adding that he was briefed on investment opportunities in financial instruments available to the Bank of Korea. He also said that he offered to the Korean side the possibility of signing a memorandum of understanding between Qatar Central Bank and the Bank of Korea to develop areas of financial and investment cooperation between the two parties, pointing out that the Korean side welcomed the initiative, where the Bank of Korea Governor confirmed Korea’s readiness to support the bilateral relations between the two sides. HE QCB Governor also said that he extended an invitation to the Governor of the Bank of Korea to visit the State of Qatar, who in turn, welcomed the invitation. At the end of the meeting HE QCB Governor and his Korean counterpart exchanged souvenirs on this occasion.