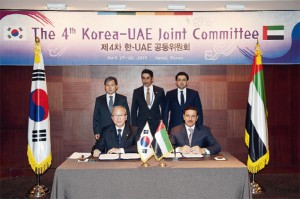 The fourth U.A.E.-Korea Joint Economic Committee today concluded its fourth meeting in which the two sides sought to further strengthen trade and bilateral relations between the two countries.

U.A.E. high-level trade delegation to the meeting was led by the Sultan Bin Saeed Al Mansouri, Minister of Economy. The Korean delegation was led by Hyun Oh-seok, Deputy Prime Minister and Minister of Strategy and Finance. Senior representatives of private and public institutions and corporations from the two countries participated in the discussions.

In his keynote speech at the meeting, Al Mansouri said, “President His Highness Sheikh Khalifa bin Zayed Al Nahyan and Vice President and Prime Minister and Ruler of Dubai His Highness Sheikh Mohammed bin Rashid Al Maktoum, are keenly interested in developing the country’s external relations especially with allies and developed countries. Our interest in consolidating relations with South Korea, a developed nation with advanced expertise in modern technology, stems from our leadership’s wise vision. We are confident that investing in this synergy will contribute to achieving the goals of comprehensive and sustainable development in the U.A.E.” Minister Al Mansouri added, “The relationship between the U.A.E. and South Korea is unique and goes back to more than 30 years. Today, our nations have established a strategic partnership, the success of which is validated by numbers. By the end of 2012, the volume of trade exchanged between the two countries reached US$7.76 billion, exceeding US$3.432 billion, which was made in 2010. Moreover, according to statistics released in 2012, 102 Korean businesses, 386 trading agencies and 1,056 brands are currently registered with the Ministry of Economy.

“On the tourism and immigration front, the number of travelers between the U.A.E. and Korea has doubled from 50,000 in 2008 to 100,000 in 2012. The number of Korean residents and visitors to the U.A.E. has witnessed a 200 per cent growth in the span of four years whereas the number of Emirati tourists to Korea increased by 18 per cent in 2012.” Al Mansouri called on Koreans to invest in the U.A.E. in the fields where they are most innovative, namely industry and technology. He stressed that the U.A.E. holds a promising future for the manufacturing and technology sector driven by the country’s leadership, which seeks to ensure the contribution of those two sectors to the country’s GDP.

The Minister of Economy also invited the Korean government and private sector leaders to benefit from EXPO 2020, which is set to offer a global exposure for participating companies.