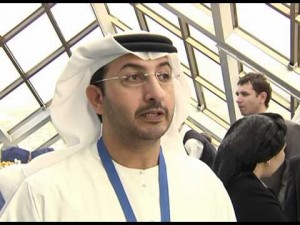 Abdullah Al Saleh, Undersecretary at Ministry of Economy for Foreign Trade Sector, received today Linar Yakupov, CE of Tatarstan Investment Development Agency (TIDA), and discussed with him ongoing preparations of UAE participation at Kazan Summit, one of the leading international economic events of Russian Federation and Organization of Islamic Cooperation (OIC). Kazan Summit 2014 will be held 5-7 June 2014, in the capital of Tatarstan Republic – Kazan, in the International Information Center.

TIDA is the co-organizer of summit.

Al Saleh stated that Sultan bin Saeed Al Mansouri, Minister of Economy, will lead a large delegation of public and private sectors to the two-day summit.

He said the UAE would be the guest of honour.

KazanSummit’s mission is to improve and strengthening of economic and trade relations of Russian Federation and OIC member countries. Summit gives an opportunity to maintain an open dialog about business tendencies, investment prospects and trading between Russia and Islamic world.