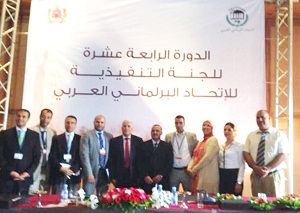 The 14th session of the Arab Inter-Parliamentary Union’s (AIPU) Executive Committee, chaired by Kuwaiti MP Faisal Fahad Al-Shaye came to a close in Marrakesh, central Morocco on Friday.
The two-day meeting, attended by AIPU Secretary-General Nour Eddine Bouchkouj, approved the report of the inner panel which met in Beirut on April 3-4.
It reviewed the implementation of the recommendations of the 20th General Conference of the Union, held in Kuwait on January 19, 2014, as well as internal financial issues.
The conferees agreed to hold the coming meeting in Jordan in November and the 21st General Conference in early next year; the venue of the conference has yet to be decided.
They decided to discuss the agendas of the 15th session of the executive committee and the 21st conference during the meeting of the inner panel, due in Beirut this September under the chairmanship of Kuwait.