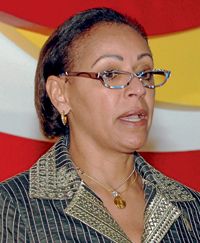 Member states of the Afro-Arab Union can easily prosper economically if they pool their natural and human resources together, said Dr Sheikha Hussa Saad Al-Abdullah Al-Sabah, in a speech at the opening of the 13th Pan Afro-Arab Forum for Business and Professional Women on Tuesday.
Sheikha Hussa, who is chairwoman of the forum, spoke highly of the need for maximum economic integration between the growing societies of the African and Arab regions.
She noted the tremendous appeal of SMEs and that the Afro-Arab economies could do well to promote them. She applauded some African countries which dealt admirably with diversifying their economies, though she bemoaned the perennial existence of poverty and unemployment, which she said stymied the flow of sustainable development.
She moreover expressed dismay that the advent of political changes such as the recent Arab Spring had unfortunately brought with it backpedaling in many Arab economies, rising rates of unemployment, and diminishing direct foreign investment.
To confront this untoward situation, she counseled that Afro-Arab economic alliances be set up at the highest official levels and that they should be fostered toward improving the standard of living of ordinary people in the Afro-Arab continents.