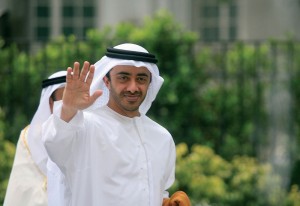 H.H. Sheikh Abdullah bin Zayed Al Nahyan, Foreign Minister,  has described former Saudi Foreign Minister, Prince Saud al-  Faisal, as a rare figure in the history of Arabs and Muslims, and  a  man whose shrewdness, smooth tongue and decisiveness all  draw the admiration of others. H.H. Sheikh Abdullah also said  that Prince Saud has acted as a safety valve in times of political  crisis in the region for four decades.

In his article entitled “The Dynamic Man”, published today in  the Arabic-language newspaper, Asharq Al-Awsat, H.H. Sheikh  Abdullah bin Zayed said, “Those who do not know him would say he is a sophisticated minister and a peerless politician. Those who do know him would add that he is also a peerless teacher and intellectual.”

“When I heard the news that he had stepped down as Foreign Minister, I said to my colleagues in a gathering that whoever described him as the Henry Kissinger of the Arabs was unfair. Prince Saud is the felicity and good fortune of both Arab politics and international politics. I wish I could tell you about his great statures in the four past decades during which he acted as a safety valve in times of political crisis in the region and a man of peace whose efforts helped achieve reconciliations between parties involved in years-long wrangling and disagreement.”

His Highness Sheikh Abdullah cited Prince Saud’s success in bringing together Lebanon’s then-warring political parties to the negotiating table to ultimately sign the critical Taif Agreement in summer 1989 as among the veteran Saudi diplomat’s most important achievements.

“Among the many things that I learnt from this great man was his humility and his keen interest in not letting people know about his achievements so that they are characterised by sincerity, which generally contradicts the character of foreign ministers who always seek to make an appearance in the media, participate in each and every event and boast of their achievements however tiny.”

“What used to make Prince Saud al-Faisal happiest was when he could carry out a mission where nobody knew he was its engineer and the man behind its success.”

“Another thing that I learnt from him was being completely clear and candid. Politicians live in a world of circumlocution and compliments that do not serve the goals. But Prince Saud al-Faisal was polite, well-bred and fair-spoken and used to take clear positions towards his counterparts where he said what was dictated by his conscience. That is why his words served as international agreements. His straightforwardness made even those who disagreed with him to call him and seek his advice in times of crisis.”

His Highness Sheikh Abdullah added that Prince Saud is “the guardian of time” and a very punctual man who never fails to keep appointments and one who does not waste time on idle talk. He seeks to achieve a lot of things in a short time and would have his breakfast this country, then have his lunch in another country and then had his dinner onboard a plane on his way back home.”

“He embarrassed other foreign ministers with his dynamism and fervid activity. We often tried to keep pace with him and when we manage to do so on one occasion, we would fail in another. He has raised the bar on the standards of Arab diplomacy which he changed from being an assignment to being a mission to which one would commit themself for the sake of protecting and promoting the interests of his country,” added H.H. Sheikh Abdullah.

His Highness noted that the former Soviet statesman and leader, Mikhail Gorbachev, once said, “If I had a man like Saud al-Faisal, the Soviet Union would have not broken up.”

” Whoever knows Prince Saud immediately recognises that he is a man of great sagacity and shrewdness, such that others sitting at the same table with him would want him to continue speaking, but he would be content with straightforward words of real value. He always had a different perspective through which he could associate events and come up with astonishing analyses and make decisions that others in his company would think that they would lead to impossible results. Time always proved otherwise.

“A friend of mine asked me once to describe Prince Saud al-Faisal in just one word. “Dynamism”, I said. “That is because I have never seen a foreign minister who is that dynamic and active. Diligence and activity were among his remarkable traits. I recall this line from a poem by the famuos tenth century Arab poet, Abu at-Tayyib al-Mutanabbi: Without hardship everyone would prevail, The generous are poor, and courage kills its own.”

“I don’t know how the meetings of Arab foreign ministers will look like without him. Despite the fact that Prince Saud al-Faisal has already laid the foundations of Arab diplomatic action, I am sure that our meeting table will always miss him. Our hearts, however, will always be filled with love for this noble man whom I pray to Allah Almighty to grant him long live, good health and happy life,” concluded H.H. Sheikh Abdullah bin Zayed.