WPP hoping to attract clients on back of Publicis, Omnicom merger

WPP, the world’s largest advertising company, is hoping to lure away disgruntled clients from rivals Publicis and Omnicom after the two companies announced a $35 billion (£23 billion) merger at the weekend. 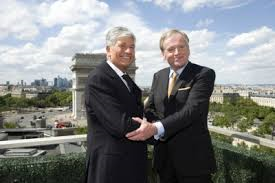 Martin Sorrell, chief executive of WPP, said the “seismic” effect of the deal between Paris-based Publicis and New York-based Omnicom will “throw out a lot of opportunities” for his firm.

He told CNN: “It’s an extremely bold, brave and surprising move … time will tell if the cultures will click and whether clients and talent benefit — and how $500 million of synergies will be generated without job cuts.”

The mega-deal, which will huddle the likes of beverage giants CocaCola and PepsiCo as well as German automakers Daimler and BMW under the same umbrella company, will lead big businesses to re-evaluate their options, said Sorrell.

He added: “We’ve seen just in the first 24 hours a number of clients and talent are concerned about what this means for them. So there will be a reassessment.”

The landmark tie-up, which will see both Publicis boss Maurice Levy and Omnicom CEO John Wrenn lead the company jointly, will create a corporate behemoth, replacing WPP as the marketing sector’s biggest player.

But Sorrell said the crown of being the world’s largest advertising doesn’t rule WPP’s strategy. He told CNN: “We said that we will spend £300-400 million a year on infill and bolt-on acquisitions … so I think it is steady as we go.”

Alex DeGroote, media analyst at Panmure Gordon in London, told CNN: “It’s a short-term fix. I think co-heads of anything just don’t work. Inevitably it will break down sooner or later.”

The newly-combined company will also seek to make $500 million in efficiency savings through what it called “business synergies” in a statement to investors and the media.

DeGroote believes the merger is a better deal for Omnicom, given Publicis’ array of European clients and its influence in digital advertising.

He added that WPP has the luxury of sitting on the sidelines and watching the two businesses struggle to integrate.

With Publicis and Omnicom headquartered in France and the U.S. respectively, the new entity will be listed on both the CAC 40 and S&P 500 indexes.