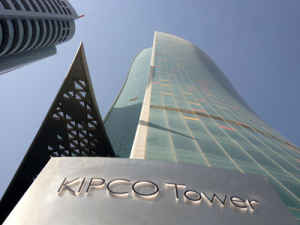 The Kuwait Projects Company (KIPCO) announced Wednesday a net profit of KD 10.3 million (USD 36.6 million), or 7.14 fils (USD 2.54 cents) per share for the first three months of 2014 – an increase of 20 percent on the KD 8.6 million (USD 30.2 million) profit, or 6.04 fils (USD 2.12 cents) per share, reported in the same period last year.
KIPCO’s total revenue for the first three months of 2014 increased by 19 percent to KD 137 million (USD 486 million) compared to the KD 115 million (USD 404 million) reported for the first three months of last year.
The company saw a 23-percent increase in operating profit before provisions for the first quarter of 2014 to KD 34 million (USD 121 million) from KD 27.7 million (USD 97 million) reported in the first quarter of 2013.
KIPCO’s consolidated assets increased in the first quarter of 2014 to KD nine billion (USD 32 billion) from KD 8.6 billion (USD 30.5 billion) at year-end 2013.
Tariq Abdulsalam, KIPCO’s Chief Executive Officer – Investments, said KIPCO’s first quarter results reflected the company’s profit expectations outlined in its Shafafiyah Investor’s Forum.
“As we announced in our recent Shafafiyah Investors’ Forum, our first quarter results reflect the continued double-digit profit growth that we expect from the company’s core businesses in 2014.
“The financial services and media segments of our business have reported profit increases of 12 percent and 211 percent compared to the first three month of 2013, while our manufacturing segment profit rose 43 percent for the same period.
“This has resulted in an overall year-on-year increase of 19 percent in revenue and a 20 percent rise in profitability. These growth trends across our operating sectors are an indication of the positive performance we expect for 2014”.