Egypt to clamp down on Al Jazeera’s Egyptian channel 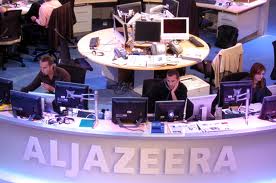 The channel this week aired statements from two leaders of the Muslim Brotherhood including a call for protests against Egypt’s new rulers. The army toppled Islamist President Mohamed Mursi last month after nationwide protests and security forces have arrested most of the movement’s leaders and killed hundreds of its supporters.

The ministers of investment, communications, and information said in a statement that the channel, Al Jazeera Mubashir Misr, was operating without a licence, according to MENA.

They three ministers said unspecified legal measures would be taken against the Qatari-owned channel “given the threat it poses to national security”.

The channel began broadcasting after the 2011 uprising that ousted autocratic former President Hosni Mubarak, and has been accused by critics of being sympathetic to Mursi’s Brotherhood, which Qatar supports.

Its offices in Cairo have been closed since July 3, when they were raided by security forces hours after Mursi was toppled, although it has continued to broadcast from Qatar.

Ayman Gaballah, the head of the channel, said the accusations were fabricated.

“We are not facing a legal problem but rather an issue of freedom of expression,” he said. “Our licence … clearly states that the channel can operate in Egypt.”

One of the Brotherhood leaders who appeared on the channel, Mohamed El-Beltagi, was arrested on Thursday. The other, Essam El-Erian, is still at large.

In addition to pursuing the Brotherhood’s leaders, accusing them of inciting violence, Egypt’s new rulers have tried to prevent the movement communicating with supporters by shutting down television stations sympathetic to it.