Dr. Rashid Ahmed bin Fahad (right image), Minister of Environment and Water, said the recognition of Abu Dhabi as Capital of Arab Environment 2015 by the Organisation of Islamic Capitals and Cities (OICC), and the , is yet another feather in theEuro-Arab Cooperation Centre UAE’s cap. 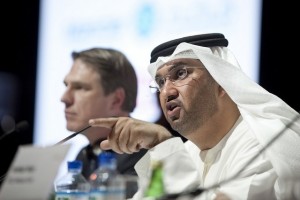 ”The honour is a glowing tribute to efforts being made by the UAE in the field of environmental protection and adoption of international best practices in this respect, consistent with the approach set out by the late founding father, Sheikh Zayed bin Sultan Al Nahyan, and under the patronage of President His Highness Sheikh Khalifa bin Zayed Al Nahyan,” the minister said in remarks on the occasion.

”Many environmental initiatives, launched from Abu Dhabi, have contributed to advancing the cause of environment and have an impact not only locally but also regionally and internationally and have acted as a catalyst and an inspiration,” he said, citing as examples the Abu Dhabi Global Environmental Data Initiative (AGEDI) and the UAE Ecological Footprint Initiative, the Abu Dhabi Future Energy Company (MASDAR), and other similar international programmes.

The UAE, he added, had taken long strides in the area of conservation of the environment and promotion of values of sustainable development, thanks to the concerted and integrated efforts made by the federal and local concerned authorities.