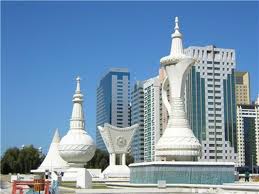 in Abu Dhabi the “UAE Economic Prospects Forum 2014” which reviewed the future prospects for the UAE in the light of the economic indicators and the economic progress achieved by the national economy under the developments of the global economy.

The minister of economy in his opening speech of the forum, expressed his thanks to the Departments of Economic Development in Abu Dhabi and Dubai, for their initiative and the preparation and organization of this important forum, which reflects the positive image of constructive cooperation between local government departments.

He said that this event also shows the keenness of the two departments, to lay solid cooperation and coordination for the benefit of the national economy, and to consider together in an affirmative way the international experiences in economic diversification policies and approaches, which are adopted and practically applied in the country, and to review future prospects for attracting direct investment and further and promote development.

The minister pointed out that the forum comes at a time when the UAE is experiencing many developments, and moving ahead at a steady pace, which enabled it to assume a prominent place amongst the countries of the world, excelling in various economic and social areas and fields, the latest of which was gaining the confidence of the world, by hosting Expo 2020 in Dubai. This in itself is an international recognition of the of UAE’s civilized and prominent status on the world map.

He said that due to peace, security, economic and social stability and sophisticated infrastructure enjoyed by the United Arab Emirates, the country was able to realize great achievements in all fields and at all levels, despite the difficulties which the world economy recently experienced, and the repercussions which reflected negatively on most countries at varying degrees.

The minister said that the UAE economy has achieved remarkable progress in 2013, where GDP rose to more than AED 4.1 trillion growing at 4% according to the IMF data, which was a relatively good rate of growth in view of the unstable global economic conditions. However, the non-oil sectors contribution to growth was considerably high, reaching 7% in some sectors 7%, while sectors of tourism, industry and finance came on top of the sectors.

The minister of economy said that the activities of the Emirates securities market increased, and that Dubai Financial Market was ranked first topping all international exchange markets by a growth rate which exceeded 106%. Abu Dhabi Securities Exchange also grew by 63%.

The minister added that the economic analysis and expectations indicated that the UAE economy will continue to achieve positive growth rates in 2014, driven by results which were achieved in previous years, while oil prices are projected to remain high, with anticipated recovery of the world economy.

Al Mansouri said that non-oil sectors are expected to achieve higher growth rates compared to last year, and this could be evidenced from the indicators of these sectors. For the manufacturing sector for example, is expected to become in the coming years the largest aluminum producer in the world, while the specialized industrial cities and the specialized industries quality industries, such as shipping and aircrafts will greatly raise the contribution of the sector to GDP and will boost diversification of the sources of income.

He expected that the tourism and travel sector will also continue to grow considerably, in view of the transformation of the UAE into an international touristic destination, and the hosting of Expo 2020 in Dubai, pointing out that the number of passengers across the airports of UAE reached about 90 million 2013.

The minister of economy expected that the general budget would achieve a surplus of 9% of GDP, which is twice the level achieved in 2012.

He added that the foreign trade sector, in which UAE enjoys a great competitive advantage, will expectedly grow in 2014, as commodity exports are anticipated to increase, as well as oil exports by 5.8 % to AED 1.4 trillion in the current year, compared to AED1.3 trillion in 2013.

The minister said that due to the expected economic recovery, and the predicted increase in re-exports, imports are also anticipated to rise tremendously this year to nearly AED 885 billion compared to AED 797 billion last year.

The minister of economy explained that in spite of the positive growth rates and the accompanying increase in domestic demand, it is expected that inflation rate will not exceed 2% in 2014, due to the flexibility of the national economy, and the ability to take appropriate measures to control prices and curb inflation. Accordingly the minister expected that the markets of the State will be attractive to foreign investments, as well as various non-oil sectors, especially the tourism, real estate, construction and financial sectors, in view of the growth of foreign direct investments by 20% in 2013, which is expected to increase to AED 44 billion in 2014.

The minister noted that according to the report issued by the World Bank in the last Quarter of 2013; it is expected that the national economy will grow by 5% in 2014, to form one of the propellers of the world economy with the rest of GCC economies.

In this context, the minister expected that the national economy would continue its positive performance in the coming years and post high rates of growth in the range of 4.5% and 5% during the period between 2015 and 2018, expecting that the GDP would reach AED1.7 trillion which will enable the UAE to maintain its position as second largest economy in the Arab world.

“We were able in a short period of time to achieve advanced ranks in international indicators, which shows the huge capabilities of our economy, especially with regards to the global competitiveness index, in which UAE ranked 19th among 148 countries, and acquired the 23rd rank in the Ease of Doing Business Index. UAE came ranked first in the index of confidence in government and economy issued by the American company “Edelman”, the minister said.

He also added that those achievements were attained through restless efforts and persistence, noting that among the most important reasons for this marvelous performance, are the sound infrastructure, the low custom fees, the availability of free and specialized free zones, the free economy and the openness towards the world.

The minister stressed the determination of the United Arab Emirates to continue boosting and enhancing the investment climate to expedite achieving it set goals. He pointed out that the Ministry of Economy, in the past few years prepared a package of legislation which is expected to contribute to stimulate the economy and to protect and develop the business environment.

The Ministry of Economy embarked recently on the preparation of the Investment Law in collaboration with partners and strategic stakeholders, and the Completion Law which was issued lately, in addition to the Arbitration Law, the SMEs draft law, and a number of other legislations.

The minister said that the adoption and entrenchment of the concept of knowledge was focused on as one of the critical means for improving and enhancing competitiveness, raising productivity and benefiting from latest scientific and technological developments rapidly, as knowledge today plays a key role in all activities related to Each production of commodities and services, operations, management, administration, services, transport, marketing, financial transactions and human resource management; thus enabling efficient use of resources and achieving goals and objectives.

He said that in order to realize and achieve qualitative excellence, localize knowledge and deepen the use of knowledge in production operations, we need to strengthen partnership between private and public sectors and re-direct and encourage the private sector to investment in elements of knowledge and productivity, and the development of human resources academically and professionally.

The minister stressed that ”We pay great attention to the human element as an axis in the knowledge economy, and to supporting SMEs, developing legal frameworks for the knowledge economy, utilizing international expertise and best Practices, increasing private and public spending for scientific research programs, establishing research centers at the federal and local levels and direct investment opportunities towards knowledge fields of economic and social development.

Al Mansouri noted that the National Agenda for the UAE Vision 2021 that was launched recently, stands as an ambitious plan for achieving economic and social goals, and reaching the set expectations in all areas, as it aims at achieving annual 5% real growth in non-oil sectors.

The minister added that the agenda aims at raising the contribution of SMEs to reach 70% of GDP, doubling the rate of employed nationals in the private sector and the rate of Emiratization in the private sector, achieving advanced positions in the index of business leadership, the index of innovation, the index of the knowledge and doubling the rate of spending on scientific research, as well as the indices of transport, communication, water and Electricity to advanced global rankings and paying great attention to the social dimension through advancing health, and services to the highest standards and levels.

The minister of economy concluded his speech by saying, “Our future ambitions have no borders and will not be deterred by obstacles, as we draw inspiration from our leaders and their persistence and dedication. We aim at leadership, and being the first, taking the number “1” as the target which prompts all of us to cooperate , and be armed with knowledge, and diligent.