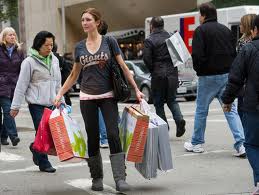 The university’s preliminary consumer-sentiment reading for August fell to 80.0 from 85.1 in July, which was the highest level since July 2007. The August result was significantly below the 85.5 reading expected by economists. Consumers’ view of current economic conditions showed the biggest decline, and most survey respondents expected to pace of growth to slow slightly. However, the changes were not large enough to affect “the prevailing view that the economic expansion will continue,” survey director Richard Curtin said in a statement. “Perhaps the most important recent changes have been the increase in home values as well as the jump in the numbers that expect interest-rate increases during the year ahead,” Curtin wrote. The survey’s measure of current economic conditions fell to 91.0 from 98.6 in July. The measure of consumer expectations fell to 72.9 from 76.5. Economists closely watch consumer-confidence indexes for clues on consumer spending, which accounts for 70 percent of U.S. economic activity.