The price of gold “collapsed” by end of last week to hit bottom at USD 1,304 per ounce, down 83 dollars from start of trade, 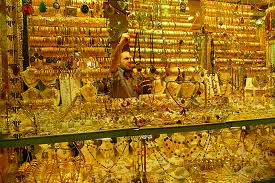 a specialized report said, Sunday. The Sabaek company report indicated the decline was over 6 percent, and an ounce of gold was trading for the least value after four weeks of gains, for reasons including easing tension over Syria as talk moved from military options to diplomatic mediation, thus dampening demand for gold as a sanctuary good. The report also said investors’ anxiety over the US Federal Reserve decision as to stimulus policy also brought down demand amid expectations the bank would be tapering down quantitative easing, and even some predictions there would be total stop of stimulus measures. Another factor weighing down the price of the yellow metal was US President Barack Obama’s intention to appoint Lawrence H. Summers as head of the reserve to succeed Ben Bernanke. “This gave investors the impression that the US economy is now in a stage of recovery and can rely upon the usual mechanism of supply and demand without extra or stimulus support. “This in turn means there is no longer the need for safe sanctuary hedging.” The report pointed out that should quantitative easing continue, it is not unlikely that gold would again hit USD 1,400 per ounce and even end the year just shy of USD 1,500 per ounce. Other factors also contributed to the drop in prices, such as drop in demand for material goods from east Asia, particularly from India where last week showed the weakest figures in a long time. “Quick speculation and electronic trading also helped bring gold below the USD 1,350 benchmark.” The specialized report forecast some gains for next week as expected correction, and added current prices would induce many investors to buy again. Silver dipped even more than gold, the report said, losing 9 percent of its value. Other precious metals were not as affected by the political atmosphere and showed lack-luster performance. In the local gold market, demand increased for pure gold and small items with 21 and 18 carat gold peaking in Thursday and Friday sales