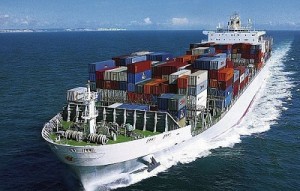 The value of exports of the Kingdom of Saudi Arabia in 2013 amounted to (1,409,747) million Saudi riyals compared to (1,456,503) million for 2012, a decline of 46,754 million by 3,2%, while the weight exported amounted to 462,344 thousand tons compared to 467,012 thousand tons, down 4,668 tons.
A report on the Kingdom’s non-petroleum commodities exports and imports for 2013, which was issued by the Central Department of Statistics and Information (CDSI), and a copy thereof was received by Saudi Press Agency (SPA) said that exports of metal products came first in terms of value by 85,71 % of the total value of non-petroleum exports worth 1,208,318 million Saudi riyals and petrochemical products ranked second in terms of the relative importance worth of 69751 million riyals by 4,95 %.
The report also pointed out that plastics and rubber and their products thereof ranked third place, by 4,56 % of the total exports worth 64,275 million riyals.

At the level of exporting countries, the report showed that Asian countries, except Arab and Islamic ones, ranked first in terms of the value of non-petroleum commodities exports by 54,28 % of the total value of exports and North American countries ranked second by 14,81 % followed by the EU countries by 11,59 % while the United States of America ranked first in the list of the most important five top countries to which the Kingdom exported, followed by China, then Japan.
The report showed that the Kingdom’s imports in 2013 amounted to (630,677) million Saudi riyals, up 47204 million Saudi riyals for the same period of previous year, up 8,1%, while total weight of the imported amounted to 83,062 tons compared to 74,493 thousand tons, up by 11.5 %.
Kingdom’s imports of machinery, equipment and electrical appliances and their parts thereof represented highest value reaching 165,230 million Saudi riyals by 26,20% of the total value of imports.
While the transport equipment and their parts thereof occupied second place worth of 107,552 million riyals by 17,05% and in third place came the ordinary metals and their products amounted to 78,121 million Saudi riyals, up 12,39%, while the chemical industry’s products and related ranked fourth by 8,02%, worth 50,554 million riyals.