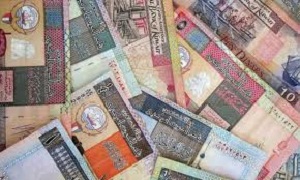 The five main currencies were stable against the Kuwaiti dinar with the US dollar at KD 0,281, while the Euro was at KD 0,384 in Sunday trade.
The Central Bank of Kuwait’s daily price bulletin also said the pound sterling was still at KD 0,473, the Japanese yen at KD 0,003, and the Swiss franc at KD 0,315.
As for the US economy, last month’s growth rate was at record numbers. The figures show that the rate of unemployment exceeded that seen prior to the global financial crisis, for the first in five years after the US economy has started its recovered.
Meanwhile, the European Central Bank decided to reduce interest rate from 0.25 to 0.15 percent, and also reduced bank deposits interest to 0,10 percent in an attempt to increase bank lending in different European banks rather than keeping the action all with the Central Bank itself.