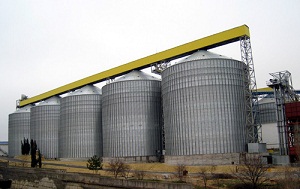 Egypt and UAE have signed an agreement for financing two wheat silos in Egypt as the Arab Organization for Industrialization, a state-owned company, will execute the project.
The deal was inked by Egyptian Minister of Supply and Domestic Trade Khaled Hanafi and UAE Minister of State Sultan al-Jaber, with several other officials from both sides attending.
The two wheat silos cost USD 32 million and have a storage capacity of 60,000 tons each, Egypt’s state-owned Middle East News Agency (MENA) reported.
The UAE pledged in October 2013 to build a total of 25 wheat silos with a storage capacity of 1.5 million tons to help prevent the loss of billions of dollars’ worth of wheat per year.
The deal is part of an agreement that was concluded by Egypt and the UAE in October 2013 to carry out several development projects in Egypt at a cost of USD 300 million, including 25 wheat silos, Minister of Planning Ashraf El-Araby said.
On his part, the UEA minister said the agreement mainly aims to boost Egypt’s food security, reduce wheat import and storage problems and improve the Egyptian national economy.
Through its aid and service projects, the UAE is focusing on projects that can achieve sustainable growth economically and socially, he added.