Workers wages on the road to protection

At the International Labour Conference, currently on in Geneva, the UAE laid out its experience in ensuring that workers’ wages are protected through an integrated system incorporating several measures to ensure that workers receive wages on time without any unjustifiable or illegal deductions. 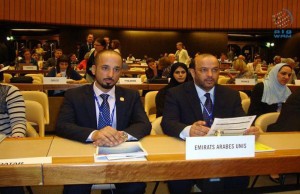 Humaid bin Dimas Al Suwaidi, Assistant Under-Secretary of the Ministry for Labour Affairs, a member of UAE delegation to the conference, said, “The worker’s wage in the UAE is considered a red line that should not be infringed upon in any way,” stressing that the Ministry of Labour does not compromise on this issue, a stance that reflects the values and principles prevailing in the UAE society and enshrined in legislation and practices directed by the wise leadership.

He briefed the labour protection committee meeting about a number of integrated measures to protect the workers’ wages in the UAE. Among such measures are making it obligatory upon private sector enterprises to transfer workers’ wages to banks and exchange offices electronically through the Wages Protection System (WPS), which is an innovative mechanism to ensure the worker receives a pay in accordance with the contract deadline and without any deductions. The system also provides the employer time and the opportunity to make an effort to fulfil his/her legal obligations towards workers in his/her establishment.

“This system provides the Ministry of Labour with updated database, which allows it to identify with immediate effect the enterprises that do not pay wages,” Al Suwaidi said, pointing out that the system had been appreciated by the experts dispatched by the ILO to the UAE to assess the effectiveness of the WPS. They recommended that the system should be implemented by the member states. He added that some member states have already implemented similar system in their labour markets.

Al Suwaidi added that the Ministry of Labour refers the firms which fail to pay wages for more than two months to the courts for action against such offenders as well as imposition of fines and other administrative actions.