It was always going to be a demanding weekend for the UAE’s Sheikh Khalid Al Qassimi in Rallye Deutschland, but the UAE driver is making the best of difficult conditions in the ninth round of this year’s World Rally Championship.

While another top-ten WRC finish may now ultimately elude him, the Emirati knows he will rarely face a more awkward examination than the one he has negotiated over the last three days.

His first rally for almost two years on tarmac, the surface he is least familiar and comfortable with, presented his biggest challenge of the season so far.

He acknowledged this at the end of the second leg on Friday night, after climbing two places on the day, saying: “I tried to push a bit more in the second half of the leg, but driving on these stages, which combine quick sections and hairpins, does not really come naturally to me.” Coming much more naturally to Al Qassimi are the gravel stages in Rally Australia where he scored his best WRC finish to date, a splendid fifth place in 2011, and after Germany he looks forward to returning down under next month. 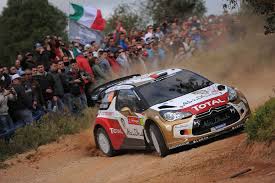 For the time being, he remains focused on avoiding the kind of mistakes which sent WRC leader Sebastien Ogier crashing out of contention on Friday, and also saw the Citroen Abu Dhabi DS3 of Mikko Hirvonen miss one of today’s many tricky junctions, and end up in a field.

The treacherously slippery and twisting tarmac roads of Rallye Deutschland have been a big test for all the world’s top drivers, but young Emirati Mohammed Al Mutawaa continued to take everything in his stride today.

Partnered by Stephen McAuley in an Abu Dhabi Citro?n DS3 R3 2WD, Al Mutawaa was lying 40th out of the 69 survivors by the end of the 10th of the rally’s 16 stages as he moved towards a highly creditable finish on his WRC debut.