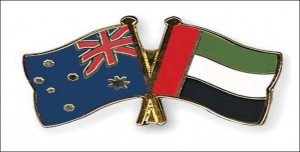 Obaid Humaid Al Tayer, Minister of State for Financial Affairs, and Andrew Robb, Australian Minister for Trade and Investment, have discussed ways to develop partnerships across various areas, in order to expand horizons for cooperation and joint action.

This came during the visit of the Australian Minister with his delegation earlier this week to the Ministry of Finance’s (MoF) premises in Dubai.

The two parties also discussed ways to overcome obstacles in the way of public and private investments in order to maintain the advantages of existing investments.

Obaid Humaid Al Tayer wished both sides good luck in their mission to strengthen ties between the two countries. He also stressed the need to exchange visits and experiences between the two ministries to contribute to the welfare and interests of the U.A.E. and Australia.

In addition, the meeting featured negotiations in relation to a number of topics of common interest, including a double taxation avoidance agreement on income, a free trade agreement with GCC countries, as well as food, tourism and flights safety.

At the conclusion of the meeting, the Australian Minister expressed his gratitude for the warm welcome and hospitality he and his delegation received, highlighting his desire for the Australian government to strengthen the friendly bonds between the two parties as well as expand joint trade investment opportunities.