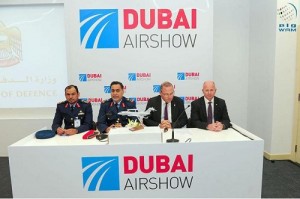 The new SRSS for the UAE uses two Global 6000 aircrafts from Bombardier as a platform. The Swing Role Surveillance System is capable of simultaneous detection and tracking of multiple targets in the air, on land and at sea. It is the latest evolution of the Erieye system that incorporates Saab s many decades of radar capabilities across all domains.

The deal was announced during a press conference today on the sideline of Dubai Air Show in attendance of Abdulla Al Hashemi, Executive Director for the Military Committee at the Dubai Airshow, and Hakan Buskhe, President and CEO of Saab.

“The new version of Erieye is without a doubt the most capable airborne early warning and control system on the market. Saab s capability to develop high technology solutions for customers shows that our focus on research and development is the right way to ensure continued competitiveness on the defence market,” says Hakan Buskhe, President and CEO of Saab.