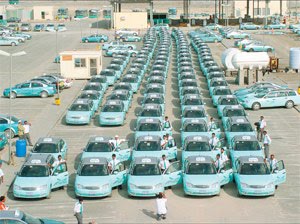 HE Minister of Transport Jassim bin Saif Al Sulaiti has launched a Karwa vehicle assembled at Mowasalat Company (Karwa), ushering its coming into service.
The release of the vehicle, which complies with international standards and high quality, took place on the sidelines of the fourth conference of the International Association of Public Transport for the Middle East and North Africa, currently underway at Dubai’s World Trade Center amid participation of public transport experts from the Middle East and North Africa.
Addressing the opening session of the conference on Sunday, HE the minister said Qatar’s hosting of the 2022 World Cup has created a new mechanism that was seamlessly integrated into infrastructure development plans in a fashion that guarantees social, human, economic and environmental legacy going in line with Qatar National Vision 2030.
He added that Doha has already initiated several huge projects such as Hamad International Airport, a new port in Al Wakra as well as underground and railway networks.