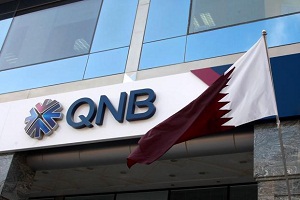 Under the patronage of HE Prime Minister and Minister of Interior Sheikh Abdullah Bin Naser Al-Thani, QNB Group held a special event celebrating the 50th Anniversary of its inception as the first local commercial Bank serving The State of Qatar.

The event was attended by an elite grouping of ministers, VIP’s, top business dignitaries and company Presidents. Included in the latter group were the presidents of both Tokyo Mitsubishi Bank and Deutsche Bank. The event was held at the St. Regis Hotel, Doha, and was also attended by long serving employees and customers of the Bank dating back to its foundation in 1964.

HE Minister of Finance and QNB Chairman Ali Sharif Al Emadi said: “Today’s celebration, marking the Golden Jubilee of Qatar Nation Bank, is a historical occasion to recall how we started the establishment of the first Qatari bank. Thanks to the sincere efforts and dedication of five generations, the bank has become a leading international financial institution, and we are all proud of being part of its team.” “Since its inception, QNB has played a key role in the development of the financial and banking system.

Basic banking transactions such as deposits and loans were provided at the beginning in 1964, and evolved and transformed into the financial system that operates today. We now offer a service that operates both to the best international practices and the latest financial and banking technologies. These were major factors in the selection of QNB as “The World’s Strongest Bank”, in 2013 by Bloomberg Markets.” added Al Emadi.

Speaking at the 50th Anniversary occasion, QNB’s Acting GCEO Ali Al Kuwari said: “Today, when we reflect and celebrate on fifty years of dedication and excellence, we must also have our eyes firmly focused on tomorrow. We must prepare for another five more decades of achievements to come. To live up to this promise, QNB has outlined our ambitious strategy to transform from a strong local and regional bank into a leading global financial institution. QNB’s strategy will focus on two main areas to achieve further growth and expansion.

The first phase will deal with expanding the Bank’s global presence through entering new markets in the Middle East, Africa, Europe and South East Asia. This will be achieved through opening new QNB branches in these markets or through the acquisition of controlling stakes in existing financial institutions operating within these same markets. This expansion aims to increase QNB’s international network contribution to represent 50% of the Group’s total assets and profitability. The second phase will focus on expanding the operations of QNB’s existing international network.

There is high potential for growth in the Group’s existing network presence, currently operating across 26 countries and 3 Continents, to provide unique banking services to our customers.” To mark QNB’s evolution and development over the last five decades, a special documentary film was screened during the celebration. The documentary highlighted the main milestones and achievements delivered by the bank since its inception in 1964, its sterling efforts to both serve and support all sectors of the country’s economy and communities, and highlighted the banks continuous drive to reflect Qatar’s National Vision 2030.

The Film also highlighted the growing expansion of the QNB Group from its humble beginnings back in 1964 operating from a single shared Post Office location in Doha with just 35 employees to “The Best Bank in The Middle East” as confirmed recently by Euromoney Magazine, operating across 590 locations with approximately 14,000 employees and a network comprising 1,250 ATM’s.
Qatar National Bank (QNB Group) was established in 1964 as the country’s first Qatari-owned commercial bank, has an ownership structure split between the Qatar Investment Authority (50%) and the private sector (50%).

QNB Group has steadily grown to be the largest bank in the Middle East and North Africa Region and is by far the leading financial institution in the country with a market share exceeding 45% of banking sector assets.