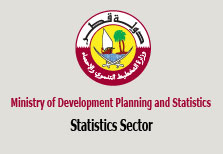 The Ministry of Development Planning and Statistics, qatar

Qatari balance of trade recorded a surplus of 36.1 billion Qatari Riyals (around USD 10 billion) in March 2014, compared with QAR 500 million (USD 137 million) or 1.3 percent in the same period last year.
The Ministry of Development Planning and Statistics, in a statement about foreign trade on Monday, said Qatari exports amounted to QAR 45.4 billion during the month of March, increasing by 8.1 percent, while value of imports rose by 3.16 percent to QAR 9.2 billion.
South Korea was Qatar’s first importer with 26.9 percent of total exports or QAR 12.1 billion. Japan followed by 23.7 percent or QAR 10.8 percent, then India with QAR 4.5 billion.
The US was the largest exporter to Qatar in March with QAR 1.2 billion, china followed with QAR 900 million and then the United Arab Emirates (UAE) with QAR 800 million.