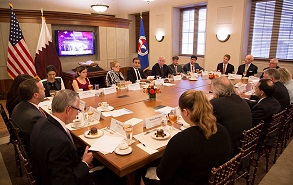 A series of meetings and events was held between Qatar Business Council and a number of chambers of commerce in the United States, in the forefront the American Chamber of Commerce, American Arab Chamber of Commerce and the Business Council for International Understanding in the presence of HE Qatar’s Ambassador to US Mohammed bin Jaham Al Kuwari.

During the meetings, HE the Ambassador focused on Qatar’s economic future and economic growth that enjoys stability and progress by confident steps towards diversifying of investment and taking advantage of the fact that Qatar is the largest exporter of liquefied natural gas in the world to explore new areas of economic activity, noting that this comes in line with Qatar National Vision 2030 and aims to reduce its dependence on the hydrocarbon sector, accounting for less than half of the GDP by 2015.

In this context, Ambassador Al Kuwari emphasized on the importance of the partnership between Qatar and the United States in the field of oil and gas, saying in less than 15 years, Qatar has become the largest exporter of liquefied natural gas in the world thanks to the vision of the political leadership of the country in opening competitive environment for investment, and that through the long technical expertise of the American partner institutions such as Exxon Mobil, ConocoPhillips and Chevron, Qatar has been able to achieve this goal.

Regarding business opportunities the World Cup 2022 offers, Ambassador Al Kuwari pointed that managers of Qatari projects contracted with a number of US companies to take advantage of their standards and specifications.
He made clear that hosting such global sport event provides an opportunity to show the capabilities of the State of Qatar, noting to the investments of this event, which may reach 200 billion dollars on a number of different sectors.

HE Qatar’s Ambassador to US Mohammed bin Jaham Al Kuwari said that the latest of these projects is Hamad International Airport and among other major projects that are considered pillars of the country’s economy are the Science and Technology Park, the Education City and the expansion works in transportation network, adding it is expected by hosting the World Cup in Qatar, the flow of tourists will increase to 15.9%, hence Qatar plans to invest about $20 billion toward the hospitality.

HE Qatar’s Ambassador to US Mohammed bin Jaham Al Kuwari pointed to the classification of the World Economic Forum for the Qatari economy as the most competitive economy in the Middle East for three consecutive years and said while Qatar continues to diversify its investment portfolio in the world through investments in Europe, Asia and Africa, it considers the United States as a fulcrum to enhance its economic strategy and concentrate the investment in US, starting in Washington, DC, through the project “City Center D.C.” which is the first Qatari investment of this size outside of the energy sector in the United States.

The Qatari Ambassador added among the manifestations of the Qatari-US partnership is the rise of US exports to Qatar in 2013 to $5 billion, an increase of 38.6% from 2012.
He also Confirmed that Qatar aims to work through common principles and invest in cultural, educational and development joint initiatives and programs in cooperation with the US.

At the top of Qatar’s priorities is ensuring access to education, Ambassador Al Kuwari said, stressing that Qatar is seeking to gain access to new educational models that can adapt to the information age. He also noted to the establishment of the Education City in Doha which would change the ways of global investment in the field of education through the creation of a huge complex on an area of ??2500 hectares and includes 11 global universities.

During the meetings, HE the Ambassador reviewed Qatari investments in training and human capital development through a number of exchange programs, including the promotion of Arabic language and culture, and the country’s keenness to raise the levels of education in the Arab world by establishing a $100 million fund for Arab students to study abroad and ensuring job opportunities in Qatar after graduation.

He concluded by emphasizing the fact that the State of Qatar has a message and it achieves credibility in that through the equation between its small size and ways to take advantage of the assets and the country’s enormous wealth. He explained that this equation enables Qatar to identify its priorities by focusing on improving living standard of its citizens and residents.