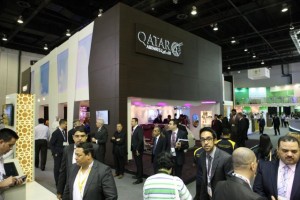 Qatar Airways is preparing to take part in the Middle East’s leading travel trade fair – Arabian Travel Market (ATM) – being held from May 5 – 8, where the airline will showcase its recent milestones and award-winning five-star service and hospitality.
Qatar’s national airline will have an impressive presence at ATM with a state-of-the-art stand, where visitors can catch a glimpse of the customized interiors of its A380-800 via a display of the new luxury First Class seats that will form part of the aircraft’s tri-class configuration, said the carrier in a press release today.
Thousands of visitors are expected to experience first-hand the displayed seats of Qatar Airways’ A380 and sample the airline’s signature hospitality. Thirteen of these aircraft are scheduled to be delivered, the first of which will enter service this summer as the A380, the largest passenger jet in the world will provide Qatar Airways’ passengers with a superior travel experience.
Heading the official delegation from the airline’s headquarters in Doha, Akbar Al-Baker, Qatar Airways Chief Executive Officer, said: “On behalf of Qatar Airways, I am pleased to participate in this year’s ATM, which, over the years has proved to be an important platform across the global travel, tourism and hospitality industries.” On the opening day of the four-day exhibition, Al Baker will host a press conference highlighting the airline’s expansion plans and announce forthcoming developments.
“Since our last participation at ATM, Qatar Airways has achieved a number of key milestones and has been recognized with a series of awards which testify to our ongoing expansion strategy as one of world’s fastest growing airlines. The exhibition will enable our visitors to enjoy a preview of the developments at Qatar Airways and also experience the five-star luxury service onboard our planes for which we are renowned for.” Since becoming a member of the oneworld global alliance in October 2013, Qatar Airways has introduced several key additional routes to its global network including Philadelphia, Hangzhou, Sharjah and Dubai World Central.
With the launch of flights to Larnaca in Cyprus on April 29, Qatar Airways expands its global network to 138 destinations across Europe, the Middle East, Africa, Asia Pacific, North America and South America. The airline is also launching seven new destinations before the end of July with new routes to Istanbul Sabiha Gokcen Airport, Edinburgh, Haneda, Al Hofuf, Miami, Dallas and Djibouti.