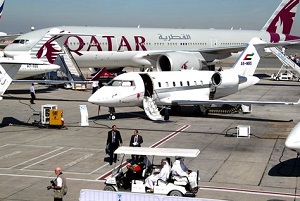 The service marked its 142nd destination worldwide from the central hub in Doha, Qatar.
With this new route, Qatar Airways is the only airline to offer non-stop service between the Middle East and Miami, Florida.

Today’s launch continues a major expansion by the airline into the United States. Non-stop service to Philadelphia International Airport began in April, and the airline will commence flights to Dallas/Fort Worth International Airport in July.
“Miami is an essential destination in our expanding global network,” said Qatar Airways Chief Executive Officer, Akbar Al Baker.

“Our aim is to bring the world closer together through a five-star unparalleled aviation experience, and we are particularly pleased that Florida is now being served from the Middle East market.” Miami International Airport is one of the largest in the United States, handling over 40.5 million passengers in 2013. It is the country’s second busiest airport for international travel and the busiest for international freight.

Qatar Airways’ Doha to Miami route is being operated with a Boeing 777-200 in a two-class configuration of 42 seats in Business and 217 seats in Economy.
Qatar Airways has seen rapid growth in just 17 years of operations and is currently flying a modern fleet of 134 aircraft to more than 140 key business and leisure destinations across Europe, the Middle East, Africa, Asia Pacific and the Americas.