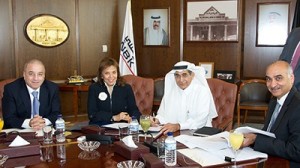 National Bank of Kuwait (NBK) and Al-Khorayef Group, a leading Saudi group, signed on Tuesday a financing agreement to arrange a USD 56.8 million syndicated facilities with a tenor of five and a half years.
The facilities will be used by Al Khorayef Group for its project with Kuwait Oil Company (KOC) for the supply of the electrical submersible pumping systems (ESP), the largest project of its kind in the Middle East, the NBK said in a release.
NBK is the mandated lead arranger for this agreement while Bank Muscat is acting as a co-lender.
Sheikha Al Bahar, NBK Deputy Group Chief Executive Officer and Saad Al-Khorayef, Al-Khorayef Group Chairman and Managing Director signed the agreement at NBK’s headquarters. Osamah Al Abdullatif, Bank Muscat – Kuwait CEO, Pradeep Handa, NBK General Manager, Foreign Corporate, Oil and Trade Finance Group, George Richani, Head of International Banking Group and other officials representing NBK, Al Khorayef Group and Bank Muscat were also present at the signing ceremony. Al Tamimi Company acted as the legal advisor on this deal.
Commenting on the occasion, Al Bahar said: “NBK has a long track record in financing major development projects in Kuwait, with special expertise in the oil projects; this mandate is yet another testament of NBK’s professionalism and credibility in the market place.” “NBK has always been at the forefront of supporting Kuwait’s oil sector,” Al Bahar added. “NBK’s relationship with Al Khorayef Group extends over several years. NBK was also the Lead Arranger and Agent bank for the syndicated loan facility for Al-Khorayef Group for financing the new Gathering Center 16 (GC-16) in west Kuwait.” The purpose of this agreement is to provide the credit facilities required by Al-Khorayef to finance its project with KOC for the supply, installation, surveillance and maintenance of the electrical submersible pumping systems (ESP), which is manufactured locally by Al-Khorayef Group Factory in the Kingdom of Saudi Arabia.
NBK is the largest financial institution in Kuwait and has been consistently awarded the highest credit rating of all banks in the region from Moody’s, Standard & Poor’s, and Fitch Ratings.
NBK also stands out in terms of its local and international network, which includes branches, subsidiaries and representative offices in China, Geneva, London, Paris, New York, and Singapore alongside its regional presence in Lebanon, Jordan, Egypt, Bahrain, Qatar, Saudi Arabia, Iraq, Turkey, and the UAE. NBK was founded in 1952 as the first indigenous bank and the first joint stock company in Kuwait and the Gulf Region.