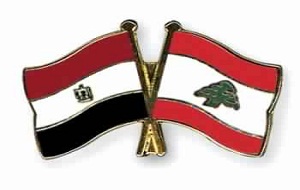 Lebanese Minister of Trade and Industry Alain Hakim said Friday his country was the 15th biggest investor in Egypt with over USD 3.7 billion, stressing that huge opportunities still exist and must be supported between the two countries.
Hakim made his remarks during a Lebanese-Egyptian business forum with participation of more than 250 businessmen, noting that the volume of trade exchange has dropped 14 percent between 2013 and 2014. Hakim highlighted the necessity to activate the joint work and hold bilateral meetings between Lebanese and Egyptian businessmen.
“This forum constitutes continuity for the special history of bilateral ties between Egypt and Lebanon, it reflects the wish and keenness of both sides on finding new opportunities that would entrench the bilateral relations,” Hakim added.
Hakim also pointed out at numerous opportunities at the agricultural level.
For his part, Egyptian minister Ashraf Salman said that his government had adopted an economic reform program that will end in the fiscal year 2019 with the main goal to reach a sustained growth and overcome all challenges facing the country.
Salman stressed that the Egyptian government is working to strengthen the role of private sector in supporting the development system in the country through new investments worth 280 billion pounds during the current year 2015, noting that it has paid special attention to the energy sector and seeks to support it through foreign direct investment.