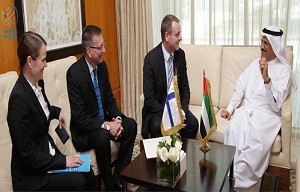 Sultan bin Saeed Al Mansouri, Minister of Economy, has agreed with Finland’s Economy Minister, Jan Vapaavuori, to strengthen cooperation between the two countries in the areas of scientific research and innovation.

During the meeting held today in the presence of the Finnish Ambassador to UAE, Ilkka-Pekka Simila, at Ritz Carlton Hotel, Dubai, the two ministers stressed the importance of business sectors in both countries to upgrade the level of joint cooperation.

They also discussed ways to develop economic cooperation between the two countries, focusing on areas of knowledge-driven economy and innovation.

Al Mansouri noted, “Finland has an outstanding track record at the international level in the fields of advanced technology, innovation, research and development, making it an important partner for the UAE in its quest to achieve a transition to a sustainable knowledge-based economy as a strategic national option.”

He pointed out that the trend towards the adoption of innovation as the basis for economy was based upon the directives of President His Highness Sheikh Khalifa bin Zayed Al Nahyan, which were translated by the Cabinet to make 2015 a year of innovation, adding that this declaration was followed by the intensification of national efforts in this area from the Ministry of Economy and various government agencies.

Al Mansouri referred to the visit of Finnish President Sauli Niinisto to the UAE last April, and his meeting with UAE Vice President and Prime Minister and Ruler of Dubai, His Highness Sheikh Mohammed bin Rashid Al Maktoum and His Highness Sheikh Mohamed bin Zayed Al Nahyan, Crown Prince of Abu Dhabi and Deputy Supreme Commander of the Armed Forces, which confirmed the level of Finland’s interest in strengthening the bonds of cooperation with the UAE in various fields.

He also emphasised the positive results achieved by his official visit to Finland at the head of an economic and a government delegation comprising various stakeholders from the public and private sectors last February. The UAE Minister said that the delegation met with Finnish Prime Minister Alexander Stubb and a group of senior government officials and CEOs of major companies to discuss ways to develop relations and to review bilateral investment possibilities of common interest.

Al Mansouri said that the visit came within the framework of the UAE national endeavour to become acquainted with the distinctive Finnish experiences and practices in a number of sectors and areas, including innovation and education, as well as to discuss ways to promote joint economic and investments between the two countries.

Further, the UAE Minister said there were a number of investment opportunities that could enhance the volume of trade exchanges between the two friendly countries, noting that the exchange of trade stood at US$576.3 million in 2013, a figure that does not reflect the status of the historic friendship between the two countries.

For his part, the Finnish Minister commended the Schengen visa waiver for UAE citizens, which he said would have a far reaching economic impact on the EURO zone, including Finland, and on the UAE, in terms of tourism and investment.

The two sides also discussed the possibility of opening more avenues for Small and Medium Enterprise projects, given their vital impact on all successful economies throughout the world.

The Finnish Economy Minister hailed the UAE’s leading role in the field of innovation and creativity in the Middle East, West Asia and Africa, and welcomed the UAE’s interest in Finnish expertise and innovation. He said that the secret of his country’s success in this area is due to its partnerships with friendly countries and existing partnerships between the public and private sectors.