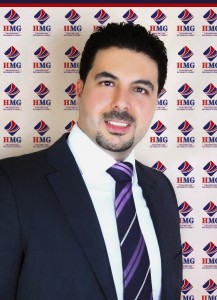 HMG Properties, an international property developer, has been awarded the membership of Asociación Profesional de Expertos Inmobiliarios (APEI) or the “Professional Association of Real Estate Experts” in Spain. It will be the first real estate group in the Middle East to receive the membership and is also set to be an officially listed company at the association. HMG develops residential and investment properties in the UAE, United States, United Kingdom and Spain.

Raed Bourjass (right), CEO of HMG Properties, described the APEI membership as an example of the growing prominence of Middle Eastern companies in the global property sector and HMG’s ability to attract Middle East-based investors to prime European properties.

Recently, HMG Properties has launched the Las Rosas Project, in Valencia and the Paradise Island Project in Canary Islands which consists of residential apartments located only 100 meters away from the golden beaches of Tenerife Island.