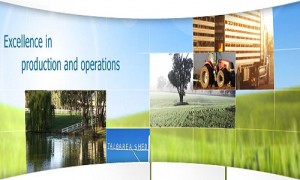 Qatar’s premier investor in the food and agri-business sectors, Hassad Food, aimed since its establishment to build a global portfolio of trusted product brands that spans across various markets, and operates with the highest levels of efficiency along with consistent quality.

Since its commencement, the company adopted a state of the art investment model that mainly focused on investing globally in viable prospects to support Qatar and the region’s food requirements. Currently, the company has diverse vertical investments in Qatar, Australia, Pakistan and Oman with potential future investments in Asia, Africa, Europe and, North and South America.

Hassad through its various subsidiaries produces 9000 tons of Green-Fodder, 3 million of cut flowers, 100 tons of chemical free vegetables, 190,000 tons of grains and 290,000 heads of sheep on yearly basis.

It covered the majority of the livestock domestic requirements during Ramadan and beyond. The company supplied the market with 100 thousand heads of chilled carcasses, which is equivalent to 50% of the local market demand from Australian sheep. Hassad Australia was founded in 2009 as Hassad Food’s first international investment to meet the company’s grain and livestock strategy.

The company plans to expand its existing poultry operations and diversify into other parts of the value chain that complements its business over the next three to five years.  Meanwhile, Senwan Pakistan, another subsidiary of Hassad Food, is specialized in producing high quality rice, with a processing capacity of 10,000 MT of rice per annum.

The company has a production unit in Lahore in Pakistan and aims to supply 15% of the total market demand for rice in the country.  Hassad will be supplying different varieties of rice like parboiled rice, basmati rice and the long grain rice from India.  Zulal Oasis, one of the subsidiaries of Hassad Food, announced in 2015 milestone achievements in the field of agriculture technology.

The pilot project achieved great success and the technology proved to be perfectly suited for Qatar’s climate. It exceeded expectations regarding the yield and quality, producing more than 37 kilograms per sqm of highest quality European Standard.

The Zulal Oasis technology is a long term sustainable production model, with the capability of producing high grade crops 12 months a year regardless of the season, since the technology was developed as an integrated farming system that operates efficiently by utilizing the local climate conditions, while efficiently using and recycling 100% of the irrigation water.