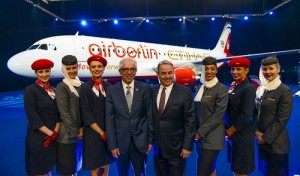 Etihad Airways, the National Airline of the United Arab Emirates, today welcomed the ruling by the Administrative Court of Braunschweig allowing it to continue operating all its codeshare flights with airberlin to destinations in Europe, the US and the UAE.

The injunction, which is valid until 8 November, provides an opportunity for the parties to resolve outstanding differences through ongoing consultation between the Governments of the United Arab Emirates and the Federal Republic of Germany. Etihad Airways as well as airberlin will continue to honour all flights and passenger travel arrangements will remain entirely unaffected.

Etihad Airways applied for the injunction to help protect the German carrier’s 8,000 employees and provide the passengers who have booked more than 82,000 journeys with clarity and confidence.

The airline was forced to launch this legal action as Germany’s Federal Ministry of Transport and Digital Infrastructure had still not approved Etihad Airways codesharing on the airberlin services during the IATA Winter 2015/2016 schedule, which begins in just two days’ time on 25 October 2015.

Etihad Airways President and Chief Executive Officer, James Hogan, said: “The failure by the German Government to approve the codeshares in time, would severely, and possibly terminally, damage airberlin, Germany’s second-largest airline, of which Etihad Airways owns 29.2 per cent. The codeshare routes in question, including flights to our hub in Abu Dhabi, were among 65 previously approved by Germany’s civil aviation authority, the LBA, and a key reason that we invested in airberlin.

Since 2012, the LBA and the Ministry of Transport have approved seven Etihad Airways schedules, including all of the codeshares with airberlin, on the basis of the Air Services Agreement signed by the UAE and Germany in March 1994 and the Agreed Minutes and Revised Route Schedule signed in June 2000.

A dispute arose in August 2014 because of a unilateral change of opinion by the Ministry of Transport, concerning the codeshare provisions of those bilateral agreements.

Mr Hogan said: “In addition to the damage it would cause to airberlin, the withdrawal of approval for codeshare services on 29 routes would critically reduce consumer choice within and beyond Germany, and cause massive inconvenience to passengers, including during the peak Christmas and New Year travel periods. More than 82,000 journeys have been booked on these flights during the next six months.

“The social and economic damage to Germany by this decision would be even greater. By suddenly disallowing established and legitimate codeshare flights, the Government will endanger the jobs of 8,000 people directly employed by airberlin, and many more jobs provided by the airline’s suppliers and business partners in affected destinations.”

Mr Hogan said Germany’s economic links to many countries would also be seriously damaged if Etihad Airways was forced to end the codeshare agreements with airberlin.

“Connectivity will be lost or diminished to a range of destinations throughout the Middle East, Indian sub-continent, Asia and Australia, as these codeshare flights are directly linked to Etihad Airways’ services beyond Abu Dhabi,” Mr Hogan said.

“Business people, tourists and families travelling between these destinations and Germany will be faced with less choice and higher costs,” he said.