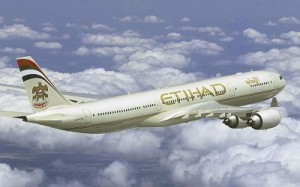 Los Angeles is Etihad Airways fourth US destination, joining Chicago, New York and Washington, D.C. on the airline s expanding network. This will increase further on 3 December 2014 with the addition of direct flights to Dallas / Fort Worth.

James Hogan, Etihad Airways President and Chief Executive Officer, said, “Los Angeles is one of the world s premier travel destinations and iconic cities and we are delighted that today it becomes part of the Etihad Airways global network.

“The greater Los Angeles area has a diverse population of more than 18 million people, the second largest in the US, who can now access direct flights to Abu Dhabi and beyond into the Middle East and Indian Subcontinent.” The Los Angeles service is set to be popular with guests looking to travel to California from other parts of the world, all of whom will experience Etihad Airways renowned customer service and product.

Guests and their checked-in baggage flying from Abu Dhabi are also processed through all US immigration, customs and agriculture inspections, before boarding the aircraft, eliminating the need to do so on arrival in the US.

Gina Marie Lindsey, executive director at Los Angeles World Airports, said: “We are thrilled Etihad Airways chose LAX, gateway to the world, for this new, historic service and warmly congratulate them on their inauguration.

“Etihad Airways joins an impressive list of international air carriers that are now able to offer passengers an improved and exceptional level of customer service with the opening of the new Tom Bradley International Terminal.” The aircraft initially serving the new Los Angeles route is a three-cabin, long-range Airbus 340-500 which can accommodate 240 guests with 12 First Class suites, 28 Business Class flatbed seats, and 200 Economy Class seats.

In mid-July, the service will transition to a three-cabin, long-range Boeing 777-200 LR which will be configured with 237 seats, including eight First Class suites, 40 Business Class flatbed seats, and 189 Economy Class seats.