Economy Ministry to Lower Prices of 400 Commodities for Ramadan 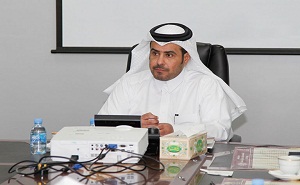 The Ministry of Economy and Commerce announced Sunday that it began selling 400 commodities for lower prices as part of the ministry’s initiatives during the month of Ramadan. The cheaper commodities will be available for both nationals and expatriates.
During a press conference held to discuss the initiative, HE Director of the Consumer Protection Department Sheikh Jassim bin Jabor bin Hassan Al-Thani said that the Ministry has succeeded to add more commodities to the list every year. The initiative began five years and included roughly 114 commodities. They have risen to 260 afterwards and this year they are 400. The initiatives aims to boost buying power of the citizen and advance the social role of traders in the country.
His Excellency noted that the Ministry has been following the implementation of the initiative and little violations were registered, stressing that the initiative succeeded in achieving its goal.
The Director of consumer production announced that the ministry allocated a QR12 million budget for meat and sheep subsidies. The ministry also introduced a new buying mechanism. Any Qatari national is allowed to purchase two sheep a season using his ID card. Syrian sheep are priced for QR950 a sheep while Jordanian sheep will be found for QR800.