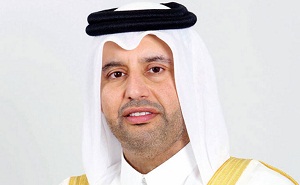 The Ministry of Economy and Commerce and Qatar Chamber of Commerce and Industry (QCCI) have announced an initiative to establish a farmers cooperative association in an effort to support food security projects, promote the agricultural sector, increase domestic agricultural production and raise self-sufficiency rate.

In a press conference held here on Tuesday to launch the initiative, HE Minister of Economy and Commerce Sheikh Ahmed bin Jassim bin Mohamed Al-Thani said that based on HH the Emir Sheikh Tamim bin Hamad Al-Thani’s directives, Qatar is keen on motivating the private sector to work with the public sector on investment and introducing practical solutions to tackle food security challenges.

Sheikh Ahmed bin Jassim said applications are being accepted for citizens wishing to register as founding members of the association as the ministry has developed the appropriate mechanism and system that ensure full transparency in the process.

The press conference, which was attended by HE Minister of Environment Ahmed Amer Mohamed Al Humaidi, was also addressed by QCCI Chairman Sheikh Kahlifa bin Jassim Al-Thani who said establishing the association was a step in the right direction toward paying more attention to the agricultural sector, which has long suffered marginalization.

He pointed to a significant decline in cultivated areas in the country, an indicator that, he said, requires concerned sides to discuss the problems facing farm owners and develop strategic plans for the organization of cultivated areas.