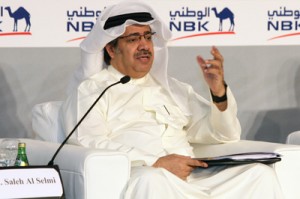 Several economists have commended the Kuwait Stock Exchange (KSE) for having adopted a fresh system for listing corporate shares with the Kuwait Stock Exchange (KSE), hailing the move as a “good step”.
Interviewed by KUNA, they believed that such a step would allow companies to be listed with the KSE provided that they should boost their capital through public subscription, thus leading up to supporting corporate activities and expansion plans.
It will further grant more flexibility to those companies which cut their capital by means of giving their enough time to readjust their positions, they pointed out.
International Financial Advisors Company (IFA) Managing Director and Deputy Chairman of the Union of Investment Companies (UIC) Saleh Al-Selmi said the union’s member firms still expect more amendments to the law on the Capital Market Authority (CMA).
The inclusion of companies in the bourse is mainly based on the requirements of the companies which are willing to join the bourse under a congenial atmosphere, he said.
The market regulations should be revamped and a congenial atmosphere be created with a view to developing the efficiency of the sector of investment and financial services, Al-Selmi pointed out.
Murabahat Investment Company Deputy CEO Mohannad Al-Mesbah hailed the fresh system as an “excellent step” that would be useful to shareholders.
He voiced hope that the new move would help the KSE attract more companies willing to have their shares listed with the bourse and draw non-Kuwaiti investors so that it could regain its regional position.
On his part, MENA Company General Manager Adnan Al-Deleimi said since the CMA law was adopted in 2010, the market has not witnessed more corporate share registrations than ever.
Fresh steps need to be taken in order to encourage the listed companies to stay and new companies to join the bourse, he requested.
Earlier on Saturday, the Capital Market Authority (CMA) issued a new system for listing corporate shares with the Kuwait Stock Exchange (KSE) in order to fulfill relevant Gulf Cooperation Council (GCC) requirements and rules.
The fresh system observes the best international practices for developing the Kuwaiti bourse and establishing the principles of justice, competitiveness and transparency which ensure more protection to dealers in line with Law No. 7/2010, the CMA said in a press release.
It is mainly intended to encourage shareholding companies to list their stocks with the KSE and to reactive their role in drawing more capital for financing corporate activities and broadening the scope of their shareholders, it added.
Established under Law No. 7/2010, which was adopted by the National Assembly (parliament) in February 2010, the Capital Market Authority (CMA) regulates and controls securities and ensures transparency, justice and efficiency.