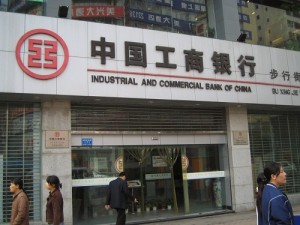 Industrial and Commercial Bank of China (ICBC), a leading bank in China, has gained the final approval of the Central Bank of Kuwait (CBK) to open a branch in the Gulf country, CBK Governor Mohammed Al-Hashel said here on Sunday.
The CBK has placed the ICBC in its official register of foreign banks as it has already obtained the required approval to open a branch here, he said in a press statement.
The move was taken in line with Law No. 32/1968 which allows foreign banks to have branches in Kuwait in order to spur and stimulate economic growth in the country, he said.
The ICBC got approvals last year from Kuwait’s central bank and cabinet. It will be the bank’s fourth branch in the Gulf Arab region after Doha, Abu Dhabi and Dubai.
The ICBC branch is the 11th branch of foreign banks in Kuwait since relevant decrees were adopted in 2004, the CBK governor pointed out.
Allowing foreign banks to expand in Kuwait will stimulate and encourage competition and the development of banking products and services, Al-Hashel added.
This will also contribute to providing more jobs to Kuwaiti people, thus positively reflecting on the business sector which plays a key role in the economic and social development process in the country, he noted.