The leading global logistics and transportation solutions provider, today announced its Full Year financial results for 2013, delivering another record year of net profits- the ninth consecutive year of record profits since listing on the DFM. 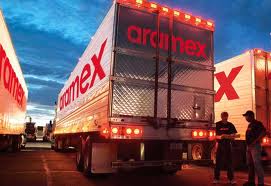 Commenting on the results, Hussein Hachem, Aramex Chief Executive Officer said: “Aramex has had another very strong set of results in 2013, despite the challenging global market conditions. Our performance was driven by solid revenue growth primarily in international express and supply chain services across our key geographies and growth markets in the Middle East and sub-Saharan Africa. We will continue to aggressively deliver on our strategy to seize current and future opportunities across these emerging markets.”

International Express recorded a strong performance in Q4 with revenues up 11% to AED 285 million. Full Year revenues were up 9% in 2012 at AED 1,057 million, driven primarily by robust e-commerce growth in Aramex’s core markets off the back of a continued increase in demand for global online shopping services across international markets. The e-commerce industry in emerging markets in the Middle East, Africa and Asia is developing at a rapid rate and capitalizing on these trends will remain a major strategic focus for Aramex, with global e-commerce revenues growing by 23% in 2013.

Logistics and supply chain management also performed strongly. Revenues in Q4 grew 11% to AED 45 million, with Full Year revenues growing 23% to AED 170 million, driven by increased demand for retail and oil and gas services across the GCC in particular.

Freight had slower growth due to continued competitive environment mainly in Europe and Asia, with Q4 revenues up 1% to AED 304 million and Full Year revenues up 6% to AED 1,235 million.

Aramex also achieved solid growth across its geographies, with the GCC remaining the largest contributor of revenues in 2013. Aramex’s new operations across its markets in Sub-Saharan Africa also continued to record strong growth, supported by Aramex’s strategy to connect these key growth markets to its global operations and hubs. Africa was a key contributor to the company’s overall performance, gaining momentum following the full integration of operations in key markets with the Aramex global network. The continent will remain a strategic focus in expanding Aramex’s global network and remains a key market for Aramex in bridging new emerging market trade corridors.

Commenting on Aramex’s outlook for 2014, Hussein Hachem said: “We are very confident of carrying our strong performance through 2014. Our role in driving global connectivity by deepening trade links between high-growth markets is paying off. In 2014, we will be actively pursuing acquisitions across these trade routes. We will also continue to capitalise on the shifting global B2C trends from traditional retail to online, further developing and strengthening our e-commerce services to create more efficient platforms and systems for e-retailers across the globe. We remain bullish in our outlook for Africa, Asia and the Middle East and will continue to drive our aggressive expansion plan, capitalising on our asset light operating model and global alliance network which remain our key competitive differentiators.”

In 2014 Aramex will additionally be investing in a number of initiatives to deepen its client services proposition, focusing on upgrading its logistics infrastructure in the UAE and Saudi Arabia in particular.